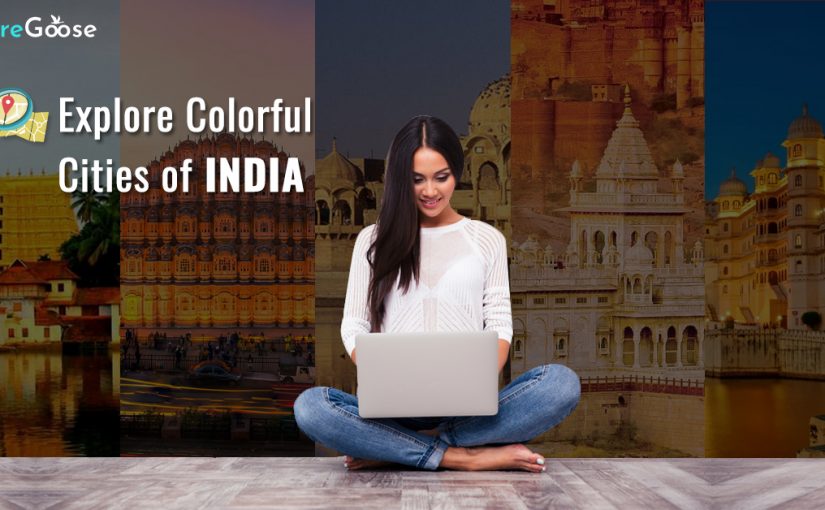 Renowned the name of a colorful country, India is full-fledged with the cities that are known by its color names. Each city has its own interesting story behind their names. Wondering about the mystery of color coded Indian cities? Let’s solve this color mystery through the blog of Airfaregoose!!!

Kerala is full of green cities, but Thiruvananthapuram is the evergreen city amongst all the cities. The city is crowned by Mahatma Gandhi due to its lavish green venues and its everlasting distinctive features. Situated between the western ghats and shores of the Arabian Sea, the city is green till the end. The city is extremely popular for its technological institutions as well such as Indian Space Research Organization, Vikram Sarabhai Space Centre, Indian Institute of Space Science and Technology and many more others.

Earned the name of Pink City, Jaipur is the capital of the Indian state of Rajasthan. The place has a very interesting story behind it. In 1876,  Maharaja Sawai Ram Singh has passed the order of painting Jaipur in terracotta pink in order to welcome the Prince of Wales and Queen Victoria. After that, it was declared as a law which states that the houses and the buildings of the city would be colored in Pink!

Being a city full-fledged with its traditional charm, Jaisalmer is well-known for its beautiful phenomenon. When the sunrays fall on the amazing Thar Desert, it looks like in brown, yellow or golden color which is extremely fascinating. The city has given the sobriquet of Brown City, Golden City or Yellow City, attracting a large number of tourists from all over the world!

Jodhpur, worldwide famous for its majestic fort which is also the highest point of the town. The city can easily stun everyone with a series of blue-hued houses and its architecture gives lifetime experience to all the travelers. It looks extremely fascinating and mesmerizes its visitors with the sea of houses that are covered in blue hues, followed by the Brahmins as the trend to make this place idiosyncratic. All the residents of the city have continued this practice, making it well-known as Blue City!

Considered as a home of multitudinous alluring lakes and captivating marble architecture, Udaipur is known as White City. The place also named as the “City of Lakes” and “Venice of the East” because of its myriad enticing lakes. The city is a hub to numerous palaces that brings lots of tourists and passengers across the globe. The place has both natural as well as historical importance in the eyes of the visitors!

Please yourself with the fascinating beauty of above mentioned colored Indian cities by booking flights to India from USA by visiting our website.