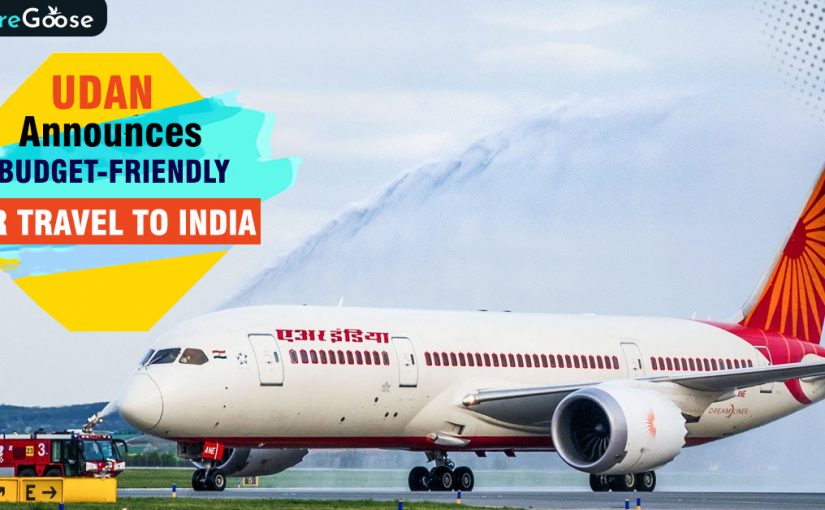 UDAN, the regional connectivity scheme launched by the Indian Government is delivering great news related to the tourism industry. The initiative began in 2017 with the main objective; to make traveling budget-friendly by air to the famous tourist places in India. This is the broad aspect of the initiative as the primary part is to renovate the existing airports & make them more convenient for passengers. While the second part focuses on opening budget routes to the 100 unserved and underserved airports that are located in smaller regions of the country. From all these places, the name of utmost tourist destinations are Shimla in Himachal Pradesh, Pithoragarh in Uttarakhand, Hampi in Karnataka, and Gangtok in Sikkim.

Furthermore, the tourism industry believes UDAN is very beneficent that make traveling to regional places simple that are reachable through long journeys by rail or road. It is said that TruJet, which is a regional airline, has direct flights from Bangalore & Hyderabad to Ballari, and is located near to Hampi. Recently, mentioned in the list of ‘52 places to go in 2019’ by The New York Times, reaching Hampi by air has been a project. But, as the underserved Vidyanagar airport near Ballari being approachable, the UNESCO World Heritage Site now stands 25 miles away.

There is an observable growth in the number of passengers that are taking the Bengaluru-Vidyanagar-Bengaluru route for years. Nevertheless, there is a slender possibility of all the passengers not visiting the heritage site but there unquestionably is an increment in the footfall.

In addition to that, the route from Pakyong that connects Sikkim with more convenience was also started. In order to support it, SpiceJet began flights on the same route. The route is absolutely better than the preceding ones where travelers had to fly into Bagdogra to reach Gangtok. SpiceJet airline also operates daily flights on the Kolkata-Pakyong-Kolkata route. Around 4790 travelers boarded the UDAN flights in October and November.

Other tourist destinations covered by the UDAN scheme are Shimla in Himachal Pradesh, where the services began in April 2017. Air India’s subsidiary, Alliance Air operates flights on the Delhi-Shimla-Delhi route and has observed a footfall of more than 14,041 travelers.

And, the list continues further as the scheme also taken over Pithoragarh and Pantnagar in Uttarakhand. After that, a rapid increase has been seen in the number of passengers to 2, 43,688 and 1, 40,794 severally. Moreover, the Dehradun-Pantnagar route begins by Alliance Air while Pithoragarh is chained to Dehradun and Pantnagar by Heritage Aviation, a helicopter operator.

Also, the UDAN Air Travel scheme will make touring to 60 new destinations in India inexpensive similar to the Bikaner–Jaisalmer–Jodhpur–Udaipur & the Ahmedabad-Bhuj-Porbandar-Rajkot. The major objective is that the Civil Aviation Ministry wants to see a rapid change in the percentage of passengers in India. It will lead to an increase in job opportunities, bring forward financial growth, and will help in accompaniment the infrastructure of air transport. Thus, it contributes a lot to tourism in India that encourages online flight booking portals such as Airfaregoose to provide travelers with a unique experience!